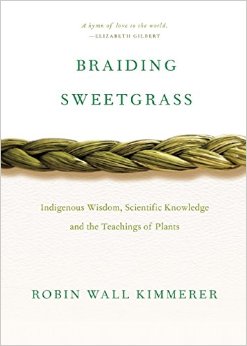 Elizabeth Gilbert describes Braiding Sweetgrass as a “hymn of love to the world.” Jane Goodall writes that Robin Wall Kimmerer “shows how the factual, objective approach to science can be enriched by the ancient knowledge of the indigenous people.” For myself, Kimmerer demonstrates the unification of modern scientific and indigenous ways of knowing. What’s especially important to me is that she erases the dichotomy between scientific inquiry and heart-centered connection to the earth. Kimmerer is a role model.

Kimmerer is a professor of ecology and botany at SUNY and Potawatomi tribal member. (Though in her biographies, she always states that she is first a mother.) Though the interstices of science and spirit seem to coexist without conflict for her, they were not always this way. She writes of her college education, “To walk the science path, I had stepped off the path of indigenous knowledge.” “I should have been told that my questions were bigger than science could touch.” She compares science and traditional knowledge to the colors of the goldenrod and aster, which grow together and are complementary on the color wheel. Their contrast to one another makes them attractive targets to pollinators.

When I stare too long at the world with science eyes, I see an afterimage of traditional knowledge…Science and art, matter and spirit, indigenous knowledge and Western science–can they be goldenrod and asters for each other?

In the preface the reader is acquainted with the purpose of the book:

So I offer…a braid of stories meant to heal the world. The braid is woven from 3 strands: indigenous ways of knowing, scientific knowledge, and the story of an Anishinabekwe scientist trying to bring them together in service of what matters most. It is an intertwining of science, spirit, and story–old stories and new ones that can be medicine for our broken relationship with the Earth, a pharmacopoeia of healing stories that allow us to imagine a different relationship, in which people and land are good medicine for each other.

Throughout the text, Kimmerer offers moral lessons and theological teachings gleaned from the earth. Each section contains a number of stories- some informative, some cautionary, but always with a purpose of illuminating our place on the vastness of life on Earth. “Cautionary stories of the consequences of taking too much are ubiquitous in Native cultures,” she writes, “but it’s hard to recall a single one in English.” The chapter Honorable Harvest invites the reader into a moral code of reciprocity: “The Honorable Harvest does not ask us to photosynethesize [as opposed to consume life]. It does not say don’t take, but offers inspiration and a model for what we should take.” She writes further of this moral code:

These may seem like charming anachronisms, rules for hunting and gathering whose relevance vanished along with the buffalo. But remember that the buffalo are not extinct and in fact are making a resurgence under the care of those who remember.

Though indeed philosophically important, Braiding Sweetgrass is also blessed with some of the finest nature writing my eyes have ever grazed.

She fell like a maple seed, pirouetting on an autumn breeze.

…a down payment on a debt of gratitude.

Getting scientists to consider the validity of indigenous knowledge is like swimming upstream in cold, cold water.

Her writing is clear, poetic, and deeply reverent. Reading it, I felt like a leaf basking in sublight–a welcome reprieve during this cold and dark season. But it is far from ethereal: Kimmerer is grounded in her writing style, each sentence purposeful and never superfluous or gratuitous. Her creative assertions were delightful. For example, Mishkos Kenomagwen: The Teachings of Grass is organized as a technical article into sections like Introduction, Literature Review, Methods, Hypothesis, Results, Discussion, Acknowledgements. This section describes a research project by one of her students that investigates the effects of harvesting on sweetgrass populations. Though it is an elegantly delivered story, its retrofit into these headings demonstrates a thoughtful point about scientific inquiry and communication. Can we tell a good story using the template of a scientific paper? Not really. Her tongue in cheek delivery was quite funny to this reader while making a good point.

A microphone in the hollow of a swelling pumpkin would reveal the pop of seeds expanding and the rush of water filling succulent orange flesh. Those are sounds, but not the story. Plants tell their stories not by what they say, but by what they do. A sculpture is just a piece of rock with topography hammered out and chiseled in, but that piece of rock can open your heart in a way that makes you different for having seen it. It brings its message without a single word. Not everyone will get it, though; the language of stone is difficult. Rock mumbles. But plants speak in a tongue what every breathing thing can understand. Plants teach in a universal language: food.

The above quote was extracted from the chapter Three Sisters, in which Kimmerer describes the means by which corn, squash, and beans grow symbiotically. Corn provides a strong stalk on which beans can climb. Squash leaves grow large on the ground, protecting the soil from the elements. The 3 sisters are an ancient trio, their story conveying life’s interconnectedness and partnership. Corn provided the height, squash the shelter. But what did the beans provide? This answer was discovered relatively recently, through scientific discoveries on the role of nitrogen fixers.

The 3 sisters offer us a new metaphor for an emerging relationship between indigenous knowledge and Western science, both of which are rooted in the earth. I think of the corn as traditional ecological knowledge, the physical and spiritual framework that can guide the curious bean of science, which twines like a double helix. The squash creates the ethical habitat for coexistence and mutual flourishing.

Illustrations of symbiosis are abundant throughout the book. Asters and goldenrods, lichens (symbionts of algae and fungi), harvesters and sweetgrass, harvesters and ash trees. This is one of many examples of how scientific revelations and discovery deepen narratives. To Kimmerer, science enriches.

I’ve never met an ecologist who came to the field for the love of data or for the wonder of a p-value. These are just ways we have of crossing the species boundary, of slipping off our human skin and wearing fins or feathers or foliage, trying to know others as fully as we can. Science can be a way of forming intimacy and respect with other species that is rivaled only by the observations of traditional knowledge holders. It can be a path to kinship.

Her use of traditional stories is expert and germane. For example, she recounts the tale of the Windigo, a legendary monster of the Anishinaabe people that travels through blizzards and stalks its prey. The more it eats, the hungrier it becomes. She uses this story to educate about the vicious cycle of consumerism:

In terms of systems science, the Windigo is a case study of a positive feedback loop, in which a change in one entity promotes a similar change in another, connected part of the system. In this case, an increase in Windigo hunger causes an increase in Windigo eating. Stable, balanced systems are typified by negative feedback loops, in which a change in one component incites an opposite change in another, so they balance each other out. When hunger caused increased eating, eating caused decreased hunger; satiety is possible. Negative feedback is a form of reciprocity, a coupling of forces that create balance and sustainability.

What’s unique about her book is that she spares her reader of environmental doom and gloom bloviation. Rather, she is interested in engaging her reader and inspiring them to joyous and celebratory reconnection. Kimmerer gives ample space to considerations of ceremony in reconstructing relationships to the land. “Ceremony focuses attention so that attention becomes intention…The ceremonies that persist–birthdays, weddings, funerals–focus only on ourselves, making rites of personal transition.” When the land gives us so much, she writes, ceremonies are a way to give something back.

But why the emphasis on relationship? She addresses the dependency between relationships and ecological ethos:

Plants are also integral to reweaving the connection between land and people. A place becomes home when it sustains you, when it feeds you in body as well as spirit. To recreate a home, the plants must also return.

Kimmerer’s writing brings me back to my days of working in tribal communities and ethnobotanical education. This may be new to some of my readers, but my path in botanical medicine is rooted in studies of medicine and culture, particularly in Salish tribal communities. From the Quinault Indian Nation I discovered of indigenous practices that protect coastal forest habitats and rivers, and how their tribal leadership can assert their voices at UN forums on climate change. From the Yakima Nation I learned how tribal lifeways were affected by the Hanford nuclear reservation mismanagement. The staff of the Northwest Indian Treatment Center at the Squaxin Island reservation taught me how cultural plant practices support recovery from chemical dependency. I learned many things from these communities and people, and have been dedicated to community and ecological health ever since.

As a non-native person, then, how am I to reconstruct a meaningful story with the land? Certainly I have many direct experiences, especially as an herbalist. But how can new stories be constructed? Kimmerer speaks to this inquiry too. I could retype the passage, but better to show you, annotations and all. (People of the corn refers to a Mayan creation story; people that were created from the four elements.) The last sentence finishes “Science is the process of revealing the world through rational inquiry.” She continues to conclude her sentiments:

I dream of a world guided by a lens of stories rooted in the revelations of science and framed in an indigenous worldview—stories in which matter and spirit are both given voice.

Kimmerer, in this expert book, sets a sterling example of what it means to be a good scientist, and a good human. Each passage demonstrates writing and storytelling skill that I personally strive for. She holds scientific and rational inquiry closely with spiritual reverence, care, and a sense of wonder and mystery. As I embark on a new academic and scientific endeavor, her words stay with me and will no doubt help guide me throughout the oppressive reductionism.

Finally, I leave you with her passage on writing:

We may not have wings or leaves, but we humans do have words. Language is our gift and our responsibility. I’ve come to think of writing as an act of reciprocity with the living land. Words to remember, old stories, words to tell new ones, stories that bring science and spirit together to nurture our becoming people of corn.

On the History of Herbals